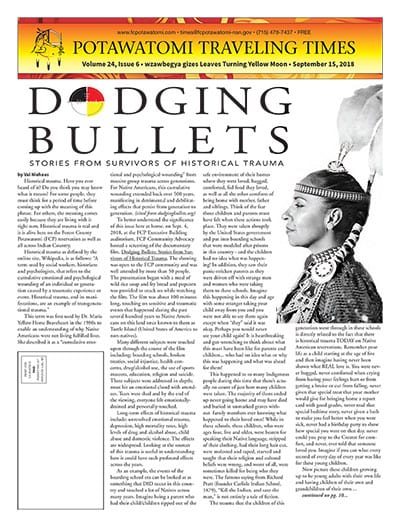 Historical trauma. Have you ever heard of it? Do you think you may know what it means? For some people, they must think for a period of time before coming up with the meaning of this phrase. For others, the meaning comes easily because they are living with it right now. Historical trauma is real and it is alive here on the Forest County Potawatomi (FCP) reservation as well as all across Indian Country.

Historical trauma as defined by the online site, Wikipedia, is as follows: “A term used by social workers, historians and psychologists, that refers to the cumulative emotional and psychological wounding of an individual or generation caused by a traumatic experience or event. Historical trauma, and its manifestations, are an example of transgenerational trauma.”

This term was first used by Dr. Maria Yellow Horse Braveheart in the 1980s to enable an understanding of why Native Americans were not living fulfilled lives. She described it as a “cumulative emotional and psychological wounding” from massive group trauma across generations. For Native Americans, this cumulative wounding extended back over 500 years, manifesting in detrimental and debilitating effects that persist from generation to generation. (cited from dodgingbullets.org)

To better understand the significance of this issue here at home, on Sept. 4, 2018, at the FCP Executive Building auditorium, FCP Community Advocacy hosted a screening of the documentary film, Dodging Bullets: Stories from Survivors of Historical Trauma. The showing was open to the FCP community and was well attended by more than 50 people. The presentation began with a meal of wild rice soup and fry bread and popcorn was provided to snack on while watching the film. The film was about 100 minutes long, touching on sensitive and traumatic events that happened during the past several hundred years to Native Americans on this land once known to them as Turtle Island (United States of America to non-natives).

Many different subjects were touched upon through the course of the film including: boarding schools, broken treaties, social injustice, health concerns, drug/alcohol use, the use of sports mascots, education, religion and suicide. These subjects were addressed in-depth; most hit an emotional chord with attendees. Tears were shed and by the end of the viewing, everyone felt emotionally drained and personally-touched.

Long-term effects of historical trauma include: unresolved emotional trauma, depression, high mortality rates, high levels of drug and alcohol abuse, child abuse and domestic violence. The effects are widespread. Looking at the sources of this trauma is useful in understanding how it could have such profound effects across the years.

As an example, the events of the boarding school era can be looked at as something that DID occur in this country and touched a lot of Natives across many years. Imagine being a parent who had their child/children ripped out of the safe environment of their homes where they were loved, hugged, comforted, fed food they loved, as well as all the other comforts of being home with mother, father and siblings. Think of the fear those children and parents must have felt when these actions took place. They were taken abruptly by the United States government and put into boarding schools that were modeled after prisons in this country – and the children had no idea what was happening! In addition, they saw their panic-stricken parents as they were driven off with strange men and women who were taking them to these schools. Imagine this happening in this day and age with some stranger taking your child away from you and you were not able to see them again except when “they” said it was okay. Perhaps you would never see your child again! It is heartbreaking and gut-wrenching to think about what this must have been like for parents and children… who had no idea what or why this was happening and what was ahead for them!

This happened to so many Indigenous people during this time that there’s actually no count of just how many children were taken. The majority of them ended up never going home and may have died and buried in unmarked graves without family members ever knowing what happened to their loved ones! While in these schools, these children, who were ages four, five and older, were beaten for speaking their Native language, stripped of their clothing, had their long hair cut, were molested and raped, starved and taught that their religion and cultural beliefs were wrong, and worst of all, were sometimes killed for being who they were. The famous saying from Richard Pratt (founder Carlisle Indian School, 1879), “Kill the Indian, and save the man,” is not entirely a tale of fiction.

The trauma that the children of this generation went through in these schools is directly related to the fact that there is historical trauma TODAY on Native American reservations. Remember your life as a child starting at the age of five and then imagine having never been shown what REAL love is. You were never hugged, never comforted when crying from having your feelings hurt or from getting a bruise or cut from falling, never given that special treat that your mother would give for bringing home a report card with good grades, never read that special bedtime story, never given a bath to make you feel better when you were sick, never had a birthday party to show how special you were on that day, never could you pray to the Creator for comfort, and never, ever told that someone loved you. Imagine if you can what every second of every day of every year was like for these young children.

Now picture these children growing up to be young adults with their own life and having children of their own and grandchildren of their own… how do you think those children were then treated growing up? Even though that second and third generation did not go to boarding schools and perhaps didn’t even know what they were, they were raised by parents and grandparents who had been raised there rather than at home with a loving family, and who had never learned how to parent or relate to their children. They treated their children the way they had been treated because it was all they knew.

If you talk with people from this reservation and many others who experienced a childhood in these schools, you will hear that they say they never heard the words ‘I love you’ and, in turn, they never say those words to their own children. THIS is an example of the way historical trauma has affected the Native American population. With many of these generations now realizing this, they are working extremely hard to change things that have resulted from these traumatic experiences. It is basic science that tells us that when we are young – as young as the ages these children were when they were taken from their families – we NEED that comfort of love to build an emotionally-stable and caring adult. Humans need to be loved and nurtured as children to grow into loving and nurturing adults. The damage done to a young brain when a loving environment is missing results in an adult who has trouble connecting with other people emotionally. This is what historical trauma is.

The boarding school issue and all it entailed are just ONE example of why historical trauma is so pertinent to problems we see today. As previously mentioned, this film touches on so many aspects of why historical trauma is currently a concern and why Native communities are the highest in suicide rates, have a high risk of drug/alcohol abuse, have genuine concerns of what education their young people are getting in schools, and the list goes on and on.

After the showing was held, there was an hour or so of discussion with those people present which was directed by Kerry Fox, Family Resource Center coordinator. We heard stories of people from this community who dealt with being in foster homes with no love shown. Others described what it was like growing up in boarding schools. We heard from a group of young Native men who are working diligently to change things in this community by reaching out to the youth and children. They are talking to them and asking them what they want to see from their tribe.

We heard from a woman who spoke of her grandmother being in one of these schools and being molested. The effects of this then carried down to her and now she wants to stop this generational trauma so that it is NOT passed down to her daughters.

A multitude of people opened up in that day. It is the first step to understanding and to healing for so many people – people with whom you see and talk to every day right here in this community.

Non-natives in attendance spoke of how they did not know any of this had ever happened; they expressed that this was the best education they have received in a long time about issues they didn’t know existed. It opened their eyes and gave them a new understanding of why things may be the way they are.

People say you never know what a person’s story is until you ask or talk with them, and not judging them, because you never know what they have been through in this thing called life. This film presents a story that opens a door into understanding just a small portion of what Indigenous people have experienced in their past that has influenced their lives today. It is well worth the time to view and to understand.

If you are really interested in learning more about this issue, there will be another showing of Dodging Bullets at the FCP Executive Building auditorium on Oct. 16, from 4 – 7:30 p.m. Dinner is served at 4 p.m., with film and discussion to follow. The event is open to the FCP Community (mature audiences) and to the general public. Those wishing to attend must RSVP by Oct. 11; limited transportation is available for elders. Please call Amanda Leonard at (715) 478-4433 in regards to either.

If you are not familiar with what Indigenous people have been through historically, it may be a very good idea to be present at this next showing. It is truly an eye-opener and helps one understand some very important things more clearly. Education is key to being able to comprehend why some things are the way they are – on this reservation as well as across Indian Country. This is why Native people are starting to take a stand and fight for what is important to them: their family, friends, culture, environment, religious beliefs, etc. There was a time when they were stripped of it all!

Come in with an open mind and heart. Listen to the people in this film and those who will be in attendance.