The Making of a Historical Trauma Film

Note: The directors prefer the phrase “Native(s)” when referencing the Indigenous People of North America. Other phrases used in this text reflect the historical content that North American settlers used and may be preferred by different Nations or demographics of Indigenous peoples. 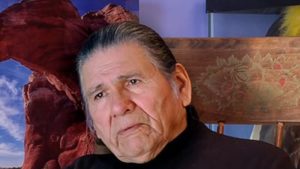 Dennis Banks spoke to us on film in a research discussion. He asked us where the name “Dodging Bullets” came from. We told him “patients with chronic health problems, are constantly dodging bullets from the effects of their treatments”. He responded, “I really like that name, it is impactful, and do you know that our people have been Dodging Bullets for Generations.”

This project was co-directed to bring a unique and differential voice to the viewer.

America’s fickle love affair with Native Americans is limited to revisionist stories of passive Indian maidens like Pocahontas and Sacajawea or fierce doomed warriors like Sitting Bull and Crazy Horse. Worse, the modern stereotype America has about Native Americans is limited to the oppressed drunkard or the fat casino cat, neither of which deserves understanding nor empathy. No matter what kind of image is evoked, you can’t win if you’re Native: A successful ‘Indian’ exploits the American way by not giving back his fair share and a downtrodden ‘Indian’ can’t pull himself up by his bootstraps no matter how much government assistance he’s given. Natives are blamed for not taking responsibility for the plight of their people and told that they don’t deserve help or money despite the fact that Natives have the highest poverty rates and the lowest access to health care of any race in the United States.

But when we look beneath the stereotypes and understand the issues and statistics of what’s really happening in Indian Country, the truth is surprising, complex, and frustrating. There are spiritual, psychological, and physical wounds experienced in large numbers of the Native population, and these hurts have a name, Historical Trauma. The theory of Historical Trauma stemmed from research done by Dr. Maria Yellowhorse Braveheart in her own community during the 1980’s and this research continues to this day by groups of sociologists, psychologists, and scientists.

Dodging Bullets confronts Historical Trauma head-on through interviews and discussions with young Native Americans whose lives are stricken by the effects of Historical Trauma. The film explores research by professionals whose work helps develop a better understanding of Trauma, and how it relates to Native Americans and provides insight into ways we can improve the outcomes of Native people dealing with these challenges. The individuals interviewed in the film come from a variety of social and economic backgrounds: for example, a middle-school student living on the Blackfeet Indian Reservation recovering from the trauma of losing her brother to a shootout with police; a former A.I.M. (American Indian Movement) soldier who, now late in life, speaks about the importance of love; sociologist and psychologists who are focused on on-site research studies in Indian country; an NIH-funded scientist who has studied and evaluated the epigenetic changes caused by trauma; a recovering alcoholic who has gone back to culture and is working with youth in Indian country to teach them mino bimaadiziwin (to lead a good way life). Live and studio Indigenous music provides an influential and authentic backdrop to the film’s narrative as well as insight from a musical storyteller’s point of view.

Dodging Bullets’ subjective credibility comes through interviews with professionals whose careers focus on developing an understanding of Historical Trauma. However, the substantial impact of the film comes from the personal stories captured of First Nations People who are resiliently living with the effects of Historical Trauma. Ultimately, it will take understanding and acknowledgment of Historical Trauma and modern-day issues, as well as systemic changes to health care, before there can be true healing in Indian Country. Without serious change, the scars of their ancestors will continue to haunt the Seventh Generation (a term used to describe contemporary Natives who live seven generations after the last Indian Wars were fought).

Over 350 people were involved in the make of Dodging Bullets.

Filmed on Location In Turtle Island

How to Watch the Dodging Bullets Historical Trauma Documentary