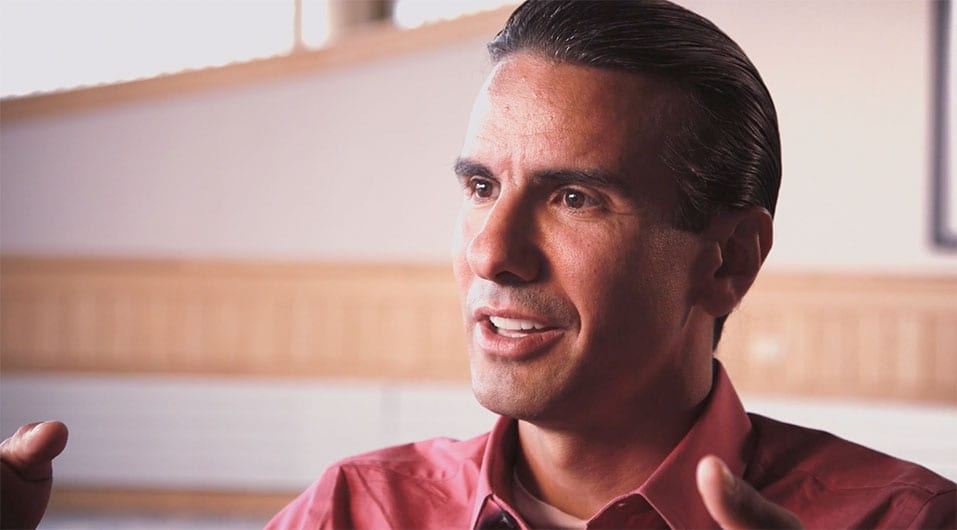 This summer, our crew for Dodging Bullets made a quick road trip to Bemidji State University in Minnesota to meet and discuss Broken Treaties with Dr. Anton Treuer.  Dr. Treuer is the Executive Director of the Native American Resource Center, we spoke about Broken Treaties, historical trauma; its’ causes, effects, and what is being done or what can be done to reverse its grasp on the Native American community. Treuer was an excellent candidate for providing another intellectual, research based insight into historical trauma. He has authored 13 books, received his B.A. from Princeton University, M.A. and Ph.D. from the University of Minnesota, and received over 40 prestigious awards and fellowships. I forgot to mention, he is also of Native ancestry; born to Robert Treuer, an Austrian Jew and holocaust survivor, and Margaret Treuer a member of the White Earth Ojibwe Nation. Having such a background made Dr. Treuer a great subject to include in the film.

The shoot began at the American Indian Resource Center, (where we were able to sit down with Dr. Treuer in their beautiful presentation room, and interview him for approximately an hour and a half about Historical Trauma. What light Dr. Treuer shed on the subject was insightful to say the least, but what really set his interview apart from the other professional interviews we have gathered was his ability to take the concepts he was talking about and to put them into laymen’s terms, providing anecdotes that have the ability to tie any person who hears what he says to their own personal lives. When we discussed Broken Treaties with Dr. Anton Treuer he was obviously well educated and has intense feelings about the subject, but he is able, through the way he talks about historical trauma, to almost lose the connotation that this interview is about Native Americans. Yes, everything he talks about has to do with Native Americans, but he allows the viewer or listener to view the topic from a different perspective, he doesn’t alienate you or make you feel like you are the cause of the problem. It is really cut and dry in the way that he goes about answering most of the questions. He tells us, in response to the question, the ‘professional’ answer, then he lets loose. You can see it in his facial expressions and body language that this is truly something he feels needs to be talked about and needs to be corrected. The interview covered topics on treaties, current real-life examples of historical trauma on reservations, and the mascot debate.

Historical Trauma never crossed my mind, until I heard what Dr. Treuer had to say…

When discussing Broken Treaties with Dr. Anton Treuer his best responses came when we brought up European settlers colonizing the land that Native peoples inhabited. He was able to very clearly and concisely recount to us specific examples of treaties that were put in place years ago that have continuously changed to take more from the Native’s or completely discounted and forgotten about. The importance of this and its tie to Historical Trauma never crossed my mind until I heard what Treuer had to say. In the truest sense, it was this lack of respect for the treaties that led to the genocide’s, physical, spiritual, social, and emotional, that have led to many of the outcomes we see today attributed to historical trauma. As Treuer put it, “…when you have one, two, or three generations in a family raised with lots of harsh physical punishment but no nurture…. It damages people.” By allowing the US Government to make these treaties and change them according to the results they wanted, there was no way of going about those actions without taking something precious from the Native people, who were there long before we arrived.

Reacting to mistakes made against Native Nations

Treuer doesn’t leave the discussions in the past though, he makes them current and really asks you to question yourself and how you react to these mistakes we have made against Native Nations. He knows exactly how the average white American today would react, he sites the emotions we have today as guilty or defensive, suggesting the average person would react by saying something along the lines of, “please don’t beat me up for the sins of my ancestors, it’s not my fault.” What is great is that he recognizes the truth in this statement; yes, you did not make the treaty or persecute the people, but what he calls to our attention is the need to “transform those natural emotive responses into positive and meaningful action.” This is exactly what the point of Dodging Bullets is, we are not setting out point our fingers and put blame anywhere, what we want this film to do is open up a discussion, reveal the things that seem to be hidden from plain sight, and to inspire within each of us the ability, on an individual or group level, to help in some way, shape, or form. Treuer says, “I think native people are ready to reconcile. But it can never start, or never be successful if it starts with ‘Forget about it, it all happened in the past.’”