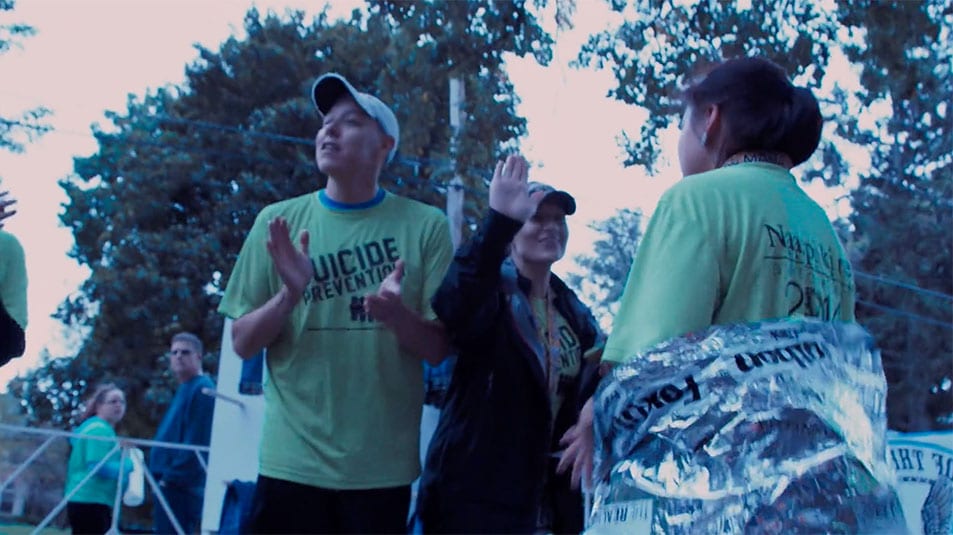 In September, our film crew for Dodging Bullets, drove out to Appleton, Wisconsin to meet Dirk Whitebreast and a group of Wittenberg Youth Council Members from the Ho-Chunk Indian Nation who ran the Fox Cities Marathon relay in support of suicide prevention. The experience was empowering, as we were able to follow both relay teams, Soul Runners and Soul to Sole, interview and listen to Dirk’s touching story, and attend a suicide prevention banquet with Dirk and members of the Ho-Chunk community.

Running to Recover from Historical Trauma

What we captured for the film is the one side of the story that seemed to be missing, and that is the story of Dirk. He shared his story of how he grew up touched by many of the negative effects associated with Historical Trauma, such as addiction, obesity, and suicide, and explained to us how his troublesome life experiences led him to become a better person and an advocate for suicide prevention. Dirk’s life narrative is the story that will tie the individual narratives of this film together; his story has links to the stories of almost everyone who has been interviewed for this film. Dirk is our real-life example of success and overcoming. He is one of the key assets in the story to exemplify historical trauma as something that does not have to define an individual’s outcome. Dirk’ story can teach young people like Chyenne from Browning, Montana and Emmy May from Red Lake, Minnesota that they have the power and ability to overcome the obstacles in their life created by historical trauma.

How a Documentary on Historical Trauma Came to be.

Last year, Bob Trench, director of Dodging Bullets, and producer Sarah Edstrom set out to research and create a documentary about Historical Trauma and its effects on Native peoples. Dr. Maria Yellow Horse Braveheart PhD., of the University of New Mexico, Albuquerque defines Historical Trauma as, “a cumulative emotional and psychological wounding over the lifespan and across generations, emanating from massive group trauma.” What started for Bob as a documentary about how historical trauma relates to chronic diseases, soon transformed into a film about the personal narratives of Native people for whom historical trauma has become a pungent piece of their reality. Through these personal narratives and interviews with professionals who study and understand Historical Trauma, Dodging Bullets has become a documentary about what it means to live within a culture that is so heavily overwhelmed with the negative consequences of Historical Trauma, and to provide an unbiased insight into ways of overcoming it.

Filming the Fox Cities Marathon, at first, was an intimidating idea; how were we going to be able to cover the entire marathon and get good, usable footage of each of the runners? The solution: film the marathon using the new DJI Ronin gimbal stabilizer with our Canon C100 while harnessed into the trunk of a Minivan. The DJI gimbal stabilizer far exceeded our expectations. When the Ronin is stabilized with the C100, the whole setup weighs approximately 20 pounds as a handheld system. We quickly realized the absurdity in expecting our cinematographer, Matt Myers, to hold a 20-pound camera setup for six hours straight while driving the course of the marathon. Luckily, the evening before the marathon, we created our own rig, using the balancing tripod for the Ronin and bungee cables to harness and lock the Ronin down to the frame of the minivan, preventing the camera and rig from falling out of the vehicle. The DJI Ronin utilizes an app that syncs the Ronin with a remote control through Bluetooth that allowed Matt to use an external monitor to remotely frame the shots of subjects running the marathon without ever having to hold the stabilized rig itself, thus allowing for six hours of continuous filming.

Although the footage of the marathon was important to capture, its main purpose was to serve as b-roll. Our real mission was to film an interview with Dirk Whitebreast that provided his first hand insight into why he was running that day, and what each and every marathon he has taken part in has meant to him. The interview took place in a small exercise room and was shot with one Canon C100 locked down on a tripod for a master shot, and a second free roaming Canon C100 (again on the DJI Ronin) to capture a secondary mobile perspective to cut with the footage from the master shot. Dirk sat with us for about an hour and a half and opened up his life to the camera, sharing deeply intimate and personal experiences that are often difficult to ingest due to the harshness of their reality. His story is ultimately something no one wishes to experience in their lives, yet many people do have experiences very similar to his own. By obtaining this interview and using it in Dodging Bullets, we are able to take Dirk’s life experience as a demonstration of how people who are affected by historical trauma do not have to become another statistic; they can control their fate, and although it may not be easy, they can strive to find inspiration and provide inspiration to others who have suffered similarly.