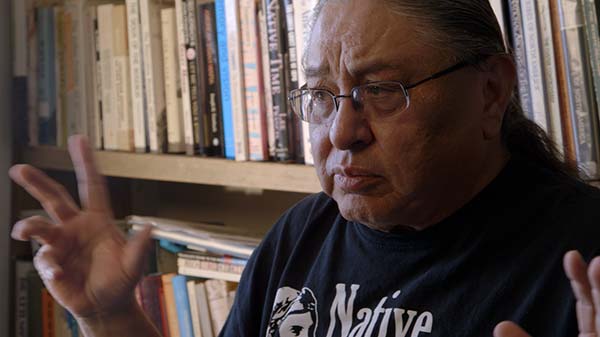 Mike Her Many Horses on Historical Trauma

Mike Her Many Horses speaks on Historical Trauma Since First Contact

At the end of April or crew for Dodging Bullets hit the road once again in the House on Wheels to head to Pine Ridge, South Dakota to gather another insightful interview.  This time we met with Mike Her Many Horses, Ole Omani Pi” (They Travel Looking For Him), a Oglala Sioux council member. As an expert Indigenous historicism Mike Her Many Horses was a consultant on the film Bury My Heart at Wounded Knee and The Way West. Mike provided  the film crew with a broader historical overview of specific intergenerational trauma experiences that happened to a vast majority of Native Americans.  He discussed with us a variety of events that happened as a result of first contact.  His historical anecdotes helped to tie together many of the other interviews we have conducted since production on the documentary began.  We realized along the way that we were gathering many personal experience stories; interviews with people who currently suffer from Historical Trauma.  We were missing the big picture, the things that first led to historical trauma happening in the first place.  We had seen some of these topics discussed by the professors and researchers whom we interviewed, but we were lacking the same perspective from someone who lives in a place where those traumatic events are only too real.

Pine Ridge, SD is the location of the mass grave of Native Americans massacred at Wounded Knee and is the most impoverished city in the United States.  As a council member, Mike, witnesses first hand the devastating impact of Historical Trauma on his people.  He believes that by participating in the film he will be able to shed light on the plight of his people.  He wants the world to see what has happened to his people, unadulterated by the perspective of the American Education system.  There have been so many different events that have been acted out against Native Americans, and many aren’t even known or discussed in modern America.

A Pain in his Heart

There is pain in Mike, it was tangible the moment he began telling us the story.  He wants to see his culture persevere, strengthen, and return to their roots.  He discusses in the interview, many ways in which this is currently happening.  But you can also see that he is striving to make changes now, so that the youth of Pine Ridge can live fuller, happier, healthier lives.  The closer we get to completing principal photography, the more we realize that ‘cure’ is right in front of us.  American’s, non-native American’s, the white man who came and took the land from these people need to recognize just how harmful we have been on the beautiful culture of American Indians like the Lakota Sioux of South Dakota.  We are here now, and there isn’t much we can do about that.  We can admit our faults, make amends, and do our duty to help prevent the further deculturization of these beautiful people.  We can provide a hand, to help, to stop the suicides, and abuse that happens on these Reservations because of the events our non-Native American ancestors acted out against these Native People.

An Ikce wicasa, he would never brag or take credit for his work. He knew in his heart that the Black Hills would be returned to our people; and he was an unwavering advocate for that cause. Mike arranged the introduction by Sen. Bill Bradley of the “Sioux Nation Black Hills Act” (Bradley bill) for the return of 1.3 million acres of the sacred Black Hills to the Great Sioux Nation. Most recently, he and John Yellow Bird-Steele negotiated the settlement of the Ramah contract support cost reimbursements for our tribe.