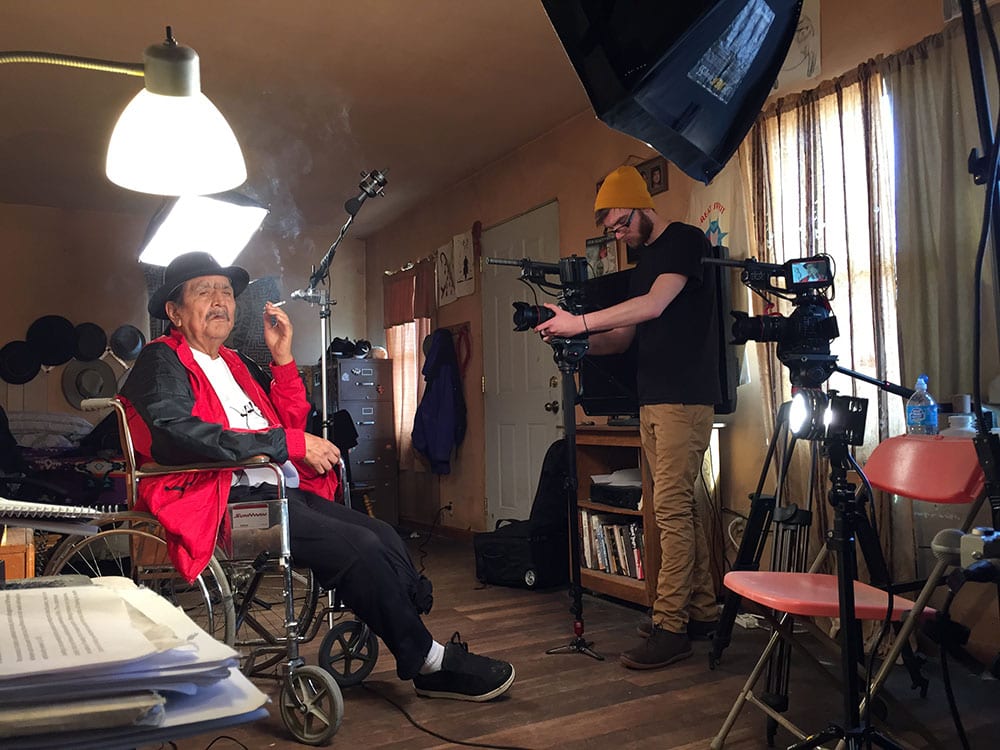 As we begin winding down our production for Dodging Bullets and get ready to enter the post-production, editing phase, we have found ourselves pushing to get as many last minute interviews as we can.  This past weekend our production team was able to hop in the minivan and drive to Santee, Nebraska to meet with a man by the name of Melvin Lee Houston, a Dakota Sioux.  Melvin, who is now in his 60’s suffers from diabetes and is currently going through dialysis 3 times a week;  it was simply amazing that he was willing to spend almost three hours with us, sharing his life story.  Melvin is a man that you can see has experienced much in life, he tells us of his youth and his love for his mother; how he was sent away to a boarding school where he witnessed and experienced abuse.  He talked about growing up, starting a family, being successful, and how he lost all of those things.  He tells us about historical events that have effected Native Americans everywhere, he talks about these experiences and how they were traumatic and how he sees this trauma continue to pass down from generation to generation.  Ultimately he talks about the resolution he sees, and it is the one thing that I have felt has been missing from our film: love.

Melvin Lee has lived.  You can see it in the lines of his face, and in the glimmer in his eye.  There is an aura about him, like he knows the true secret of the universe, and it was palpable from the moment you walk into his home and he greets you like he’s known you forever.  Melvin, is the prime example of what this documentary aims to show the world.  He is a man that like all of us, has made mistakes in his life, he has been effected severely by alcoholism, he lives by the choices he made and it seems like he seeks for his on salvation in solitude, like being alone has helped him learn what’s real in life, his family, his tribe, his community, and his heritage.  Melvin is a wealth of knowledge, having been a active and key member of the American Indian Movement he has seen much in the way of progress, and has educated himself on American Indian historical events to use as backbones for further change.

Watch Melvin Lee Houston discuss The hanging of 38+2, and where is Cut Nose’s Skull There doesn’t seem to be anger in Melvin, what anger may have resided in him seems to have now turned to passion.  I have not witnessed someone speak so passionately about the problems faced by the Native youth today.  He no longer seems to worry about himself, rather he seems to worry about the past and the future.  He examines history, looking for the moments that may play key roles in Transgenerational trauma and its effects on Indians today.  He talks about it beginning with first contact, he says, “all we did was mimic white men after that [first contact], and we shouldn’t have.”  He sees the beauty in tribalism, he sees how the loss of culture and the loss of pride in Indian heritage has torn apart tribes, how it has led to today, where substance abuse, violence, diabetes, and suicide afflict so many Native Americans.

Melvin seems philosophical when he speaks.  He cites episode after episode of Transgenerational trauma events, either he experienced or Native American’s as a community experienced.  He uses his life as an example to help show young people what to stay away from.  Melvin wants only good for his people, and all people.  He sees the trauma and sadness that so many people go through every day, and he talks about how easy it is to give up.  He is a man that sees a simple answer to all of these issues, love.  Until we can all love and not look out for personal self interest, no one will ever get to be better.  He wants everyone to come back together and work together to strengthen each other, to become a tribe once again.  If we want to defeat Historical Trauma we must use love.