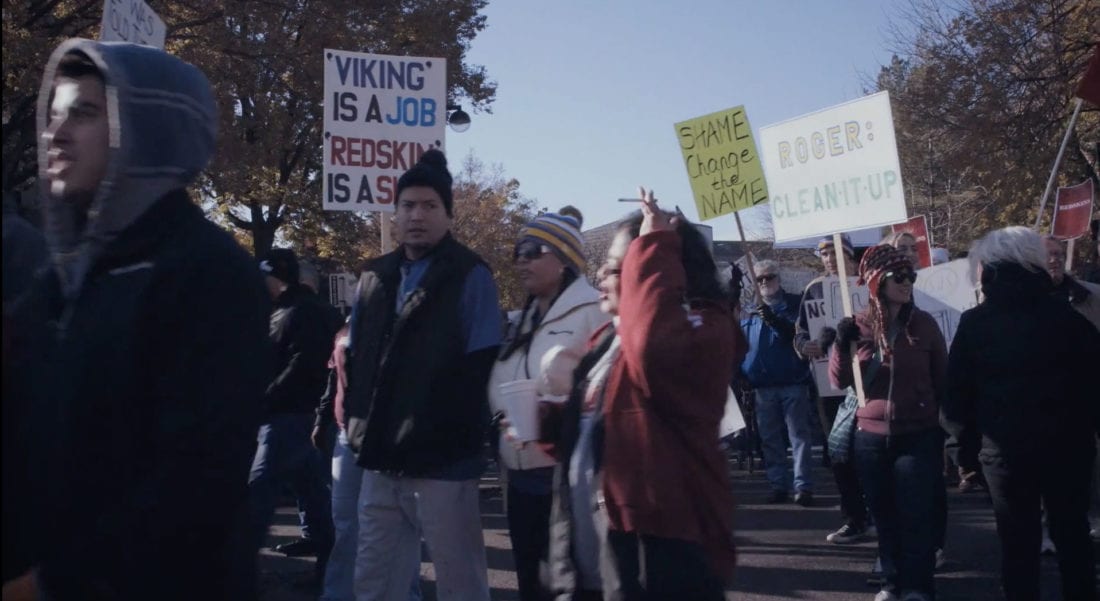 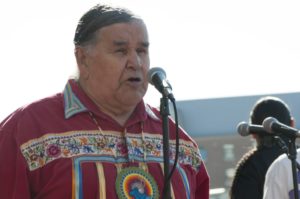 Our crew for Dodging Bullets documented the Racist Indian Mascot rally at TCF Bank Stadium in Minneapolis, know known as the Huntington Bank Stadium to witness and capture the protest that took place during the Vikings vs. Washington NFL football game.  More than 5,000 people came to march and protest the use of the Racist Indian Mascot names and logos. The protest, arranged and put on by the American Indian Movement and the National Coalition Against Racism in Sports and Media, gathered on the University of Minnesota campus early Sunday morning and marched to the front of the stadium where a small stage was placed that would serve as the platform for the 29 speakers that would speak out against the use of derogatory and degrading name. “Change the Name, change the Name!” became the chant throughout the day, with speakers calling out to the crowd of protesters to look up to the box where Redskin’s owner Dan Snyder and chant those words.

It was a peaceful protest, with no arrests or reports of violence.  People of all races gathered with a common purpose, to teach respect and end the ignorant use of a mascot and name that has such a violent history associated with it.  Most people do not even know where the actual term Redskin’s comes from historically, yes it was a term used to describe the color of Natives skin, but its’ violent history began when the term was used in reference to bounty placed on Native scalps which would each hold a reward of $200.  Dan Snyder and others that defend the use of the name and mascot argue that it honors Native peoples, but it is a struggle to find any sense of honor in the mass genocide of a race for monetary gain.  The people who gathered in protest listened to 29 speakers who each elaborated on reasons why they want this name to change now.  The reason that came up most often and tied directly to our documentary; was that the name needs to change for the benefit of our children of today.  They deserve to have a sense of honor in their heritage, and that by having a name like the Redskins, automatically shows our Native youth that their cultural identity and ancestral history is something that is not worthy of remorse or even acceptance.  It is as if Dan Snyder and the defenders of the name simply cannot admit to the true bloody history of the name and its meaning to these Native people. 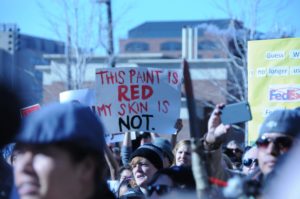 In every interview we have conducted for the film we have asked the participant what their stance is on the mascot debate, and we have seen a variety of responses, from “it real doesn’t affect me” to “it doesn’t matter what the non-native world thinks about mascots…if the native world predominantly finds them significantly offensive…we need to get rid of them and they are offensive to a lot of native people.”  During the production of this documentary we have gotten to see many stories of young people who are struggling with problems such as depression, suicide, and addiction; and all of the professors we have spoken with share a common mindset on how to help end these problems, that is to show the native youth of today that they are important and that their history and culture is beautiful and worthy of defending and continuing.  One of the best ways to do this and to show the youth that they matter to the United States; would be to get rid of the Washington mascot and name.  Doing that shows respect and honor, it shows the youth of today that we cannot allow history to be forgotten, that the natives that lost their lives to this blood bounty did not do so to become a mascot.  We have to recognize and admit that we have red in our ledger, that we massacred a group of indigenous people for profit, and we continue to withhold justice through the continual use of the Washington mascot and name.

Witnessing and participating in this protest really showed us that the time for change is now.  After last season’s protest at the Metrodome that held a turnout of about 700 people, it is easy to see that just one year later and over 5,000 people participating to fight for the same cause, change will hopefully happen sooner than later.  As Dr. Anton Treuer put it in our interview with him, “They are on the wrong side of history.  It may take 100 years to change it, but it’s not worth defending.”